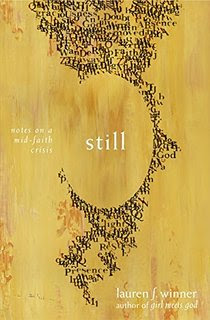 Lauren Winner’s first book, Girl Meets God is the story of her conversion to Christian faith from a Jewish background. This book, Still, is “notes on a mid-faith crisis” and is a collection of thoughts, stories, poems and quotes from a period of time when Lauren’s faith wavered. The crisis was brought on by the death of her mother and the failure of her five year marriage. She had married three weeks after her mother died and I wonder if grief had more of an impact on her marriage than she acknowledges.

Lauren makes the comment that mostly during this crisis of faith she went to church by habit which is possibly the thing that kept her from losing her faith altogether. The book resolves towards the end with Lauren coming to a deeper place of faith but also realizing that she is on a spiritual journey which may have further highs and lows.

Although some parts of the book puzzled me, I also found it genuinely interesting as it’s such an honest and often blunt account of her emotional upheaval during a difficult period of her life. I found much in the book I could relate to and I’m sure others going through a similar crisis of faith will find it helpful.

Let the children come to me Previous
Devotional Thought : Isaiah 8:13 Next