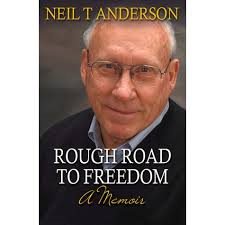 I sense Neil Anderson wrote his memoir Rough Road to Freedom with some reluctance because the early part of the book is quite stilted, which is unlike his other books. However as the book progresses and, once he begins to write about his passion – our identity in Christ, the book gains Anderson’s familiar flow. I actually wonder if writing his memoir gave Anderson an excuse to write again about the importance of knowing who we are in Christ.

I have read many of Anderson’s personal experiences in his previous books but it was good to read them in chronological order and in the context of the rest of his life’s journey. There were also some incidents that I have not read elsewhere – how he met his wife, for example, and the criticism he received when he began preaching and writing about resolving spiritual conflicts. It seems many theological conservatives were very against Anderson preaching about the demonic, even though the Bible is specific about demonic activity. However the opposition only served to encourage Anderson to spread his message overseas to the blessing of many.

I enjoyed reading this book because it filled in the gaps in my mind of how God lead Anderson to the place where he had a world wide ministry. I also liked reading about Anderson’s attitude, understanding that this ministry may only be for a season.

While I enjoyed reading Anderson’s memoir, I found it helpful to have read Anderson’s previous books before embarking on this one.