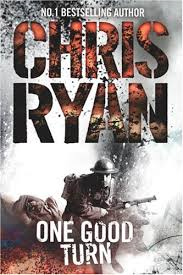 One good turn by Chris Ryan is a well written story set during World War I. Ryan’s own experiences of warfare help write a believable tale of courage and cowardice. The book describes the horrors of war and the different ways people respond in the midst of atrocious. For some, it brings out the best in them and others the worse.

I was disappointed however, with the ending and therefore did not grade this book (on Goodreads) as highly as it deserved. Ryan had the opportunity to conclude the story with hope and a small triumph over the injustices of war. Instead he opted for a brutally realistic ending. Probably Ryan believes fiction should not sugar coat the cruelty of war but I can read about these cruelties in history books, in fiction I want to come away with a sense of hope which Ryan denied me.

Nevertheless it was an engaging story.