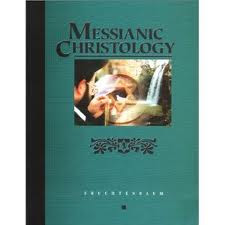 Messianic Christology by Arnold Fruchtenbaum (Ariel ministries, 1998) is a fascinating look at Old Testament prophecies concerning the first coming of the Messiah. Although many of these prophecies are ones that I am familiar with the insight that Fruchtenbaum brings to them from a Jewish perspective is very enlightening.

The book is basically divided into looking at the prophecies from the Law, the Prophets and the Writings – the normal divisions that Jewish rabbis make. Fruchtenbaum begins each chapter with the Scripture reference and then proceeds to elaborate on the meaning of each prophecy, adding historical data and Jewish background material. The significance of the destruction of the Jewish temple in 70AD is particularly highlighted as not only was the temple destroyed but so were all the Jewish genealogy records. This meant that tracing the lineage of the Messiah after 70AD would not be possible yet several prophecies indicate that the Messiah lineage would be traceable. This strongly suggests the Messiah must have been born before 70AD which, of course, points to Jesus – something that orthodox Jews do not accept.

Towards the end of the book and in the appendices, Fruchtenbaum includes some further studies on such things as the Nephilim, Daniel’s seventy sevens, the wise men, the death of Judas Iscariot as well as thoughts on the trinity of God as revealed in the Old Testament.

Messianic Christology is easy to read, informative and instructive.