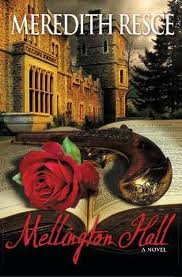 Mellington Hall is a murder mystery/romance novel by Meredith Resce. It is set in Wales in 1839. It begins when Sarah Montgomery finds the master of Mellington Hall, Lord Alan Mellington, lying near death after an apparent attempt on his life. She sets about saving his life at enormous personal cost to herself and her reputation.

The story exposes the self-righteous, legalistic attitude of many in the church of that day which is not pretty, but unfortunately realistic. Sarah’s relationship with Alan Mellington faces many challenges ranging from further death threats, unhelpful neighbours, suspicious church members and dubious household servants.

This is a well told tale with the many twists you would expect in a murder mystery and ends completely satisfactory. The characters are well drawn and believable. Those who like Christian fiction but find it too convenience when the characters become Christian will enjoy this story as no one is converted! Though there is a clear message to avoid a judgmental attitude but act with grace.