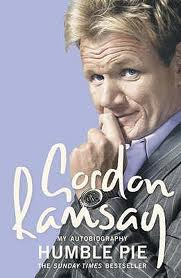 Humble Pie by Gordon Ramsay is an autobiographical account of Ramsay’s rise to a celebrity chef and restaurateur.

It begins with an honest and disturbing account of growing up in a home where domestic violence was viewed as acceptable. Ramsay’s family moved often due to his father’s irresponsibility which disrupted Gordon’s schooling as well as being emotionally difficult.

Ramsay had a promising future playing football but this was curtailed by injury. Instead he managed to gain entry into a catering college. On completion he quickly obtained work in various restaurants and gained experience working under a number of chefs. He was 32 when he opened his first restaurant. His strong work ethic, persistence and determination are very apparent.

Ramsay is well known for his bad language and quick temper. This is also obvious in his book but is more forgivable when you read of his father’s abuse and neglect.

Humble Pie is part of the Quick Reads series and an interesting portrayal of Ramsay’s life.