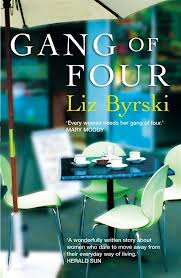 I enjoyed Liz Byrski’s story, Gang of Four. It revolves around four women, Isabel, Sally, Robin and Grace who are friends in their early fifties. Their lives have become repetitive and limited but it is not until Isabel makes a break, that the others are embolden to make changes themselves.

I found the four characters, although in a similar life stage, to be believable and different enough from each other, to make it easy to keep track of them as the story jumped from one character to another, overlapping from time to time before continuing on.

The four friends come from different marital situations. Isabel is married, Grace a widow, Sally is unmarried and Robin is having an affair. They are all successful in their careers. Yet they are all in various states of discontent and have unresolved issues from their past or present. While initially it is Isabel who finds the courage to step out of her comfort zone to make the changes that will enhance her future, slowly the others follow her lead and realize that it is possible, even at their age, to make changes.

Sally and Robin both have secrets they have not shared with the others, which is surprising given the close nature of the friendships, but understandable. Through the story they confront their secrets and find some sense of freedom.

The book ends on a sad, but hopeful note, where each of them has gained a better perspective on themselves and their lives.

This was a pleasurable read, especially for women in this stage of life where children are independent and life changes can still be made.