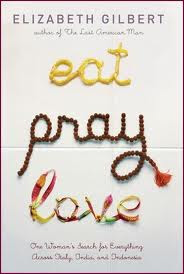 Eat pray love (New York, 2007) is an autobiographical account of one year in Elizabeth Gilbert’s life. It was the year she decided to travel the world and spend four months in Rome, four months in India and four months in Indonesia and the book is divided neatly between these places. Gilbert made the decision to travel following a traumatic divorce and an unfortunate rebound relationship. She realized that she had spent most of her life in and out of relationships with men and really didn’t know who she was outside of a relationship. The decision to visit India and Indonesia came out of chance encounters with spiritual leaders and her decision to visit Rome came about because she loves the Italian language.

Gilbert describes her attempts at Eastern spirituality in much detail. She also had the amazing knack of making friends of total strangers who often had interesting stories of their own.

Eat pray love is a remarkable story in many ways as Gilbert journeys through, not only physical countries, but also the landscape of her emotional baggage with the ongoing backdrop of her spiritual quest. Her honest account of her highs and lows is engaging and often entertaining.