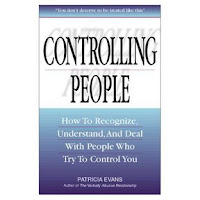 Controlling people : how to recognize, understand, and deal with people who try to control you by Patricia Evans (Adams Media, 2002)

This is a complicated book which uses its own set of jargon to explain the behaviour of controlling people. However on the whole the author is successful at getting her message across. Evans looks at all types of controlling relationships ranging from minor difficulties with work colleagues, to difficulties in marriage relationships, to domestic violence, to terrorists groups and cults. I found the book enlightening and her advice helpful.

Evans’ main argument is that controlling people are unaware that they are under an illusion which makes them believe that the person they are tying to control, refered to as the witness, thinks exactly as they do. This gives them a sense of connectedness, albeit an unhealthy one. So any attempt by the witness to act in a separate way or voice an opinion that is different to the controller is seen as an attack or an affront. In its mild forms this may just make the controller feel uncomfortable or irritated, in more serious cases it makes the controller violent.

This book makes a helpful edition to understanding people’s behaviour.

We can live guilt-free.