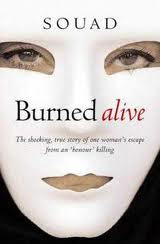 Burned Alive (Bantam Press, 2004) by Souad is a true story about an attempted honour killing. The story is written by the victim, Souad,(in collaboration with Marie-Therese Cuny) in a very down to earth, matter of fact way. This makes a very distressing story less emotional then you would expect.

The story begins with Souad describing her life in a small isolated village in the Middle East. It is an abusive situation – physically, emotionally and socially, yet it is all Souad has ever known and she writes about it as if it were normal. In her late teens Souad meets a man who takes advantage of her and she finds herself pregnant. The man, who has in effect raped her, leaves her to face certain death. Amazingly Souad escapes the attempt on her life but is left in hospital to die. She is rescued by a humanitarian organization and taken to a hospital in Switzerland. Souad faces a long, painful healing process with much courage. The book concludes happily with Souad married and living in Europe with her children though still facing challenges as she continues to deal with the psychology damage of her past.

This is not an enjoyable tale and yet it is written with a sense of hope which makes it an encouraging read.