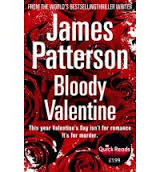 Bloody Valentine is an intriguing murder mystery. It was only spoilt by Patterson gory description of the murder in way more detail then was necessary.

The story resolves around wealthy restaurant owner Jack Barnes and his second wife Zee who is expecting their first child. Jack and Zee are apparently happily married and live in a luxury apartment block with other members of the family. All seems perfectly normal until one of them is violently murdered, leaving very few clues for the police or the reader. The murderer is cleverly concealed until the last half dozen pages.

A well constructed mystery and part of the Quick Reads series.

We make sacrifices for those we love.