Book Review : Beyond the Bounty 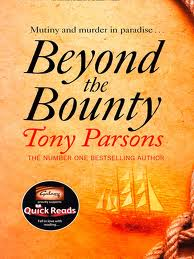 As part of my reading over the Christmas break I read, Beyond the Bounty by Tony Parsons. It is part of a series called, Quick Reads. The idea being that well known authors can write a short book which gives new readers a sample of their writing style. This series is ideal for me as I am fussy about the type of fiction I read and don’t like to commit to reading several hundred pages from an author I’m unsure of.

Beyond the Bounty is historical fiction based on the events which occurred after the mutiny on board the ship, The Bounty. The author, Tony Parsons, has researched the history of this incident and written a believable tale which includes the known facts. The book is a very sad insight into humanity.

After spending five months in Tahiti the sailors were loathe to give up the comforts they found there – most particularly the comfort of being in a women’s arms. The story strongly suggests this was this reason for the mutiny and not primarily Bligh’s cruelty. Following the revolt these mutineers had the rare opportunity to start a fresh community in an idyllic environment but were unable to let go of their greed and past prejudices. This lead to an inability to work together which caused conflicts, unrest and ultimately murder.

This is a well told story which provides a poignant look at human nature.