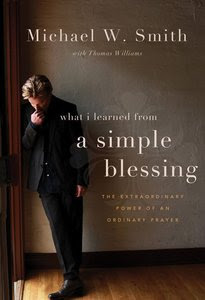 Michael W. Smith is a Christian musician who travels the world performing concerts. In his travels more and more he found himself listening to people facing many of the problems that are rampant in Western culture—divorce, bankruptcy, addictions. It seemed that being a Christian wasn’t making a difference because Christians have bought into the self-gratification thinking of their day. Although Smith was happy to pray for people, he began wondering if there was more he could be doing. He decided to start praying a blessing at the end of his concerts. He knew that praying in public was not a more effective way to pray but hoped that those being prayed for would realign themselves with more godly values.

Smith was surprised at the response to his prayer of blessings as people were being touched and helped in larger numbers that he ever anticipated. As a response he has put together this short book, A Simple Blessing: The Extraordinary Power of an Ordinary Prayer, with the help of Thomas Williams. The book is easy to read and explains each of the statements in the prayer adding more details and the change of focus Smith is hoping to achieve in his readers.

Smith is at pains to explain there is no magic in the prayer. It is about our heart attitude. Do we want to renew our thinking and readjust our lives to the priorities and values of the Bible? Do we want to be channels of God’s blessings rather than just stagnating lakes?