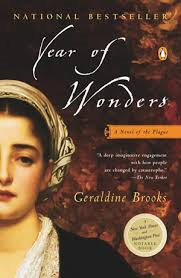 I won’t be adding to the thousands of reviews of Geraldine Brooks’ Year of Wonders on GoodReads and elsewhere, so instead I’ll write a few reflections which will contain many spoilers.

Brooks apparently researched the historical accounts of the “plague town” and in the absence of a lot of anecdotal accounts, created a fictional story. However this is heavily biased by her own beliefs. At times it felt like Brooks had an underlying motive of bringing Christian faith into disrepute. Certainly I can understand people, even ministers, losing their faith during an extreme crisis and the rise of superstitions from grief and fear was perfectly understandable. However history would tell us that not everybody loses their faith in dire circumstances. Some even find faith or have their faith strengthen, and many find comfort in their faith when facing death. Yet there was no acknowledgement of this in Brooks’ account. Anna involvement in the Muslim faith at the end is another indication to me of Brooks’ desire to discredit Christianity.

It seems Brooks wanted to show that the minister’s decision to encourage a voluntary quarantine of the town, while the plague ran its course, was wrong. Historically the statistics would show this was true as more people died in this town than elsewhere. However significantly less people died in the surrounding area, showing they did stop the disease spreading to other towns. Whether this would have happened anyway is debatable. Furthermore for some in the village, like Anna, they had no where to flee to anyway as it was unlikely that people from other towns, except close relatives, would provide refuge for people from a town where the plague was present. Also staying in the town guarantee them basic food and medicine which would not have been the case if they left.

I like, many others, was disappointed with the ending. As much as I do like a happy ending this one was such an abrupt change of pace, setting and context I found it unrealistic. I suppose Brooks wanted Anna to live happily ever after and thought it wouldn’t happen if she stayed in the village. She probably didn’t want the predictable, but more satisfying ending, of having her married to Michael. Yet it was actually difficult imaging Anna happy anywhere else apart from the village that she gave her heart and soul for. Amongst those who survived a great crisis there is often a strong sense of camaraderie but Brooks makes no mention of this. Revealing that Michael never had sex with his wife as penance at this point in the story was out of character and unnecessarily dramatic, but I suppose Brooks had to find an explanation as to why Anna didn’t want to marry him.

The ending also left many other loose ends – what did Michael do? Did the village regroup? I expect it did since the village is still around today and didn’t become the ghost town which you might expect from the way Brooks finished her story.

The story is beautifully told and written. If it had a better ending I wouldn’t feel so dissatisfied.

In the Bible we are told to ‘train’ our children not force our desires on them.