Home | Blog | Book Reflection : The Bible and the Land

Book Reflection : The Bible and the Land 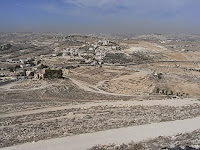 Recently I wrote a book review of The Bible and the Land by Gary Burge where I dealt with the content. Now I would like to explore the impact this book had on my thinking in light of my trip to Israel last year.

It has been difficult for me to articulate but I found my trip to Israel somewhat disappointing and puzzling. Prior to my trip I understood Israel was the “Promised Land”; a “land flowing with milk and honey”. I was not expecting there to be so much desert, so much desolate country or so many rocks.

I read the story of the 12 spies coming home with a single cluster of grapes carried between two poles and imagined the whole country was extremely fertile but in actual fact these grapes came from a fairly small area – the Valley of Eshkol.

As I said in my book review, Gary’s insights helped me better understand God’s purposes in giving his people the land of Israel. It is a demanding land with an uncertain water supply, situated in a dangerous corridor with unforgiving wilderness and unruly neighbours.

Moses understood Israel was not like Egypt (Deuteronomy 11:10-12) and they would not be able to rely on flood irrigation, rather they would have to rely on God to supply rain. “This is a land that demands faith” (Burge 2009, p. 26). Another unusual feature of Israel is the lack of defined boundaries. It antiquity it was situated between two major powers Egypt and Mesopotamia. It was a land bridge between them and later on between Europe as well. This was another area that required faith in God to protect them from invasion and occupation. This also meant that the cultures of other nations were often pressing in upon them. Would they be faithful or would they lose their distinctiveness and compromise with other cultures?

Perhaps Israel is best described as the Land of Promise rather than the Promised Land. Isaiah prophesied, “Water will gush forth in the wilderness and streams in the desert” (Isaiah 35:6). One day it will live up to its promise and be a land of milk and honey. Interestingly the only place in the Bible where the term “Promised Land” is mentioned is Hebrews 11:9 – the chapter on faith.

The promise of the land is like many of the promises God makes to us, they are for those who have the faith to receive them.