My book review is here. 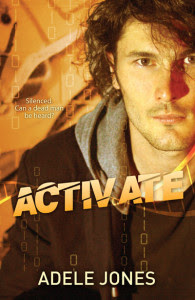 About the Book:
Josh Hammond’s not who he says he is. To stay alive, he must guard his identity, existing isolated from his former life and those he loves. The one enemy he can’t outrun is his failing health, and time is short. Desperate for a solution, Josh leaves the protection of his safe house unapproved. Instead of a cure, he’s left powerless against a cunning adversary. Determined to reclaim his life, he grasps an opportunity for escape, but things go drastically wrong. Can he find a way to expose the lies of a criminal mastermind, or will he be silenced? Forever.

About the Author:
Adele Jones lives in Queensland, Australia. Her writing is inspired by a passion for family, faith, friends, music and science – and her broad ranging imagination.

A strong believer in embracing life’s journey, Adele delights in sharing that adventure with others, be that through the pages of a story or engaging in a social or professional context. Through her broad personal and professional interests, she has welcomed diverse engagement opportunities, including science based student experience sessions, conference presentations, literary readings and musical exploits.

With a long standing interest in historical fiction, Adele based her Master’s dissertation on this topic and is currently anticipating release of her first novel in this genre, A Devil’s Ransom (www.roseandcrownbooks.com). She has also had a variety of poems, short stories, inspirational meditations, devotions and magazine articles published. Her first YA novel Integrate was awarded the 2013 Caleb Prize for unpublished manuscript, and is due to for release in September 2014. Replicate is the second book in this series and was released in October 2015.