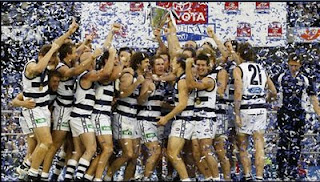 I don’t normally post about sport, especially football but I’m going to make an exception since Geelong, the team that I have been following for the last 42 years finally won the AFL (Australian Football League) premiership last Saturday. (The last time they won a premiership was in 1963. I wasn’t living in Australia then, besides which I probably would have been too young to remember anyway!) In those 42 years that I have been following, Geelong lost five grand finals. One particular player played in four losing grand finals – how disappointing would that be! Anyway on Saturday his two sons were in the Geelong team so he experienced success at last, even if it was through his kids.

I can’t think of anything particularly spiritual to say about this except I couldn’t help but think of Moses wondering around the wilderness for 40 years – that’s a long time.

One thought on “40 years is a long time”

When we hold our peace and remain at rest in difficult circumstances we make God’s name glorious.